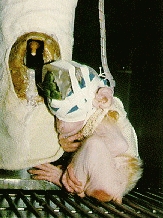 This infant monkey was rescued from an animal research laboratory. She was found in a darkened room with her eyes sewn shut.

Please take some time and write letters to as many prisoners as possible. Be thoughtful and tell them about yourself, send news articles, stories, jokes, etc., etc. They've traded their personal freedom for that of the animals - this is what matters. And since we are not there with them, we should provide as much support as possible for them. Jail can be a lonely place, but it doesn't have to be. Your letters can keep them company. Don't be discouraged if you are not responded to (some prisoners have restricted outgoing mail) - each letter is important as a connection to the outside. (Thanks to everyone who has posted new prisoners' addresses or corrections, and thanks especially to those of you who write. Any corrections or additions can be sent to: wonguy@juno.com

Please post this to all relevant e-mail lists and websites.